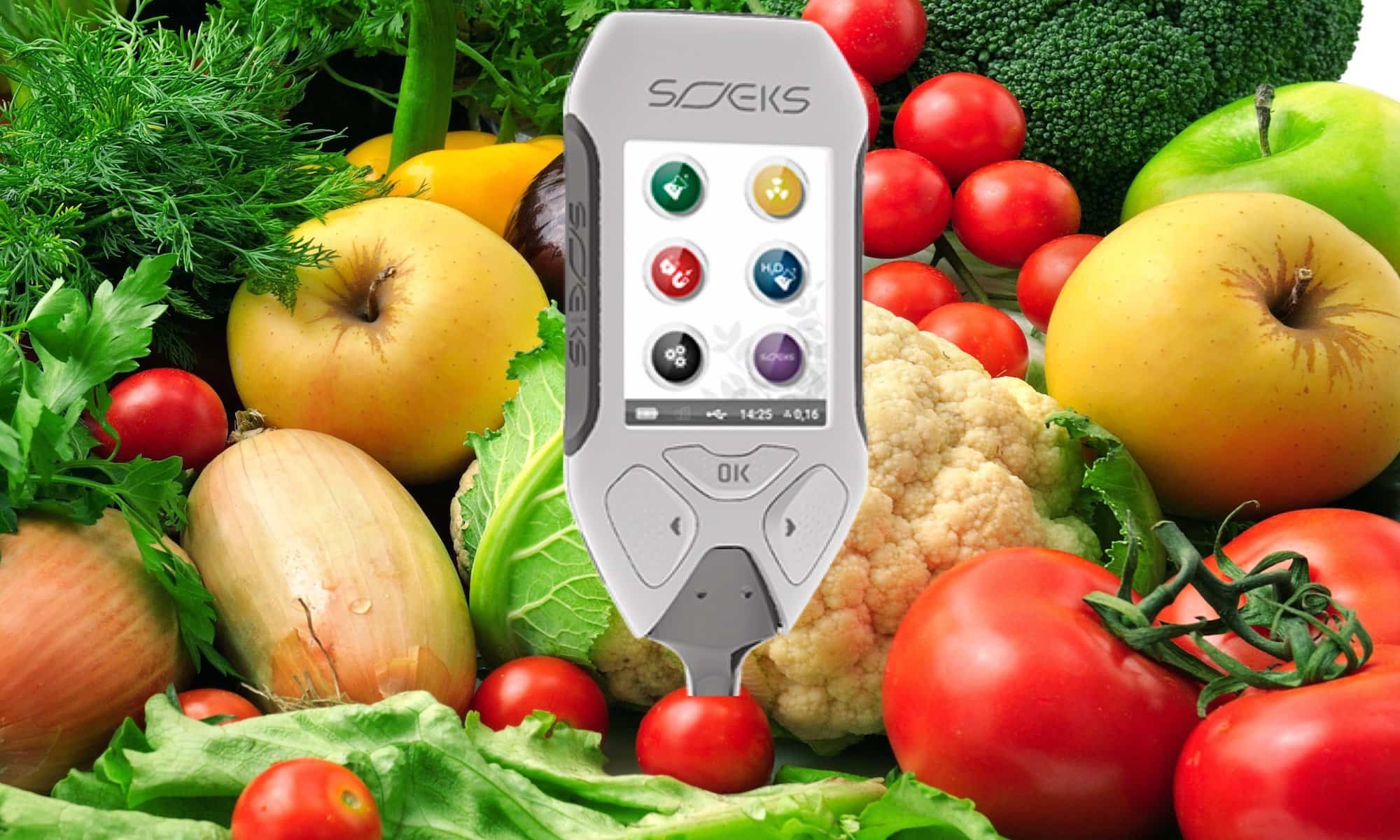 The SOEKS EcoVisor F4 is a 4-in-1 testing device that is designed to:

SOEKS EcoVisor F4 performs express analysis of nitrate content in fresh fruit and vegetables. Nitrate content analysis is based on conductivity of alternating high-frequency current in the measured product (ionometry).

Main parts of the device consist of:

4. LEFT button for menu navigation, return to previous menu when pressing for 2 seconds.

Measurement of nitrate content level is based on the patented technology of a biobased product ionometry (Patent of invention № 23 90 767 Ionometry Method for biobased products and the device for its performance) and has been developed by the SOEKS company.

The technology is based on a specialized procedure method that puts high-frequency electric current through pulp.

Every plant contains ions of potassium, magnesium, ferrum (iron), cuprum, chlorine, plenty of organic acids and other elements in certain amounts that are necessary for proper growth.

The amount of every single element (ionic or molecular) is determined by bio organics of certain plant (it has a basic level of ion concentration) and by contents of water and soil where the plant grows.

People often use fertilization for efficient growth of plants. For instance, saline fertilizers such as nitrates and phosphates. As they break down and the plant easily absorbs these fertilizers.

As it spreads around the plant, saline ions (nitrates, phosphates and etc.) accumulate in different plant parts including fruits. This leads to higher amount of electrolytes and to higher electrical conductivity of fruit as well.

One should also understand that the shown result is evaluative and cannot be compared to quantified chemical analysis at an advanced laboratory. That kind of analysis requires a lot of time and is not free. Nevertheless, the presence of such laboratory and qualified analytical chemist at home is impossible for the majority of people. The EcoVisor F4 is a like portable lab that allows you to avoid buying suspicious products. This will help protect yourself, your relatives and children from being exposed to these poisonous products.

The nitrate tester analysis takes only a few seconds. The only maintenance it requires is to change the battery or charge the accumulator just as you would your mobile phone.

Of course, you may ask yourself is there an increased electrical conductivity if a fruit or vegetable does not contain nitrate ions? This is possible. But will the consumer feel safer buying a product with increased amount of phosphates or any other ions instead of nitrates or when buying a product that is already going bad? One should not forget that basic electrical conductivity is determined for every single type of fresh fruit or vegetable. When a product goes bad, the content and concentration of organic acids change.

ATTENTION! We strongly do not recommend to measure nitrate content in liquids, chemically and heat-treated products, products that are not included in the device’s menu list. Received data will be misleading and uncertain.

One should also remember that the device is designed for measuring products at a room temperature. Change of the product temperature can increase measurement uncertainty. This regards to products that have just been taken out of fridge or have been exposed to sun rays. In SOEKS EcoVisor F4 there is a function of thermal compensation, which is achieved by means of embedded temperature gauge in probe of the device. Thanks to software patches, when measuring you can get the same measurement result even when temperatures of measured products are different.

There are fruit and vegetables in the list of Nitrate tester, which contain air cavities (for instance, sweet pepper). When measuring such products, it is important not to insert the probe into the air cavity. When the probe is inserted into the air cavity, the measurement result will be misleading.

Radiation is ionizing, because it leads to atomic ionization of substance that is struck by radiation. Ionization is called the process of striking one or a few electrons out of atom. After that, nucleus and left electrons create a system that is positively charged and is called an ion.

Ionized atoms strongly differ from average nucleus. Ions destroy other molecules by breaking a bond between nucleuses. That is the reason why ionized radiation influence on human’s health is harmful.

Radiation influence on the human body is called irradiation. Irradiation transpierces any body tissues and ionizes their particles and molecules. This leads to creation of ionized nucleuses (ions or so-called free radicals) that destroy molecules and lead to inclusive death of tissue cells.

As it was said before, nuclear disintegration into elementary particles is accompanied by radiation of these particles. This radiation is divided into following types:

X-rays are electromagnetic radiation (just like gamma decay) but it has less energy. In everyday life, it is used only at medical institutions.

Neutron radiation is an uncharged particle streams (neutrons). It occurs only in nuclear reactors.

To estimate the influence of gamma decay which are the most absorbed radiation type and give most impute to human exposure, the concept of air radiation dose is used. It has its own unit of measurement – roentgen (R).

Electromagnetic field (EM field) is a special form of matter which measures the interaction of charged particles. It represents interrelated alternating electric and magnetic fields. EM field spreads from one space point to another in form of electromagnetic progressive waves running from source.

EM field is created of particle charges. For example, in physics, students do experiments with ebonite electrification to demonstrate the electric field.

Magnetic field is created when electrical charges move through a conductor.

Experimental Data of Russian and foreign research show that electromagnetic fields are highly bioactive and can negatively affect our health.

Many researches of EM field’s biological effect allow us to detect the most susceptible body systems: nervous, immune, endocrine and reproductive systems. These body systems are critical in our daily function.

The following are symptoms of high EM field exposure can cause fatigue, irritability, sleep disorders, memory impairment and lack of attention.

The biological effect of EM fields tends to accumulate and can consequentially cause the degenerative process of the central nervous system, blood cancer (leukemia), encephaloma and endocrine system.

EM fields are especially dangerous for children, pregnant women, people with disorders of central nervous, the endocrine or cardiovascular system, allergic individuals and people with a compromised immune system.

Research has shown that the nervous system of the human body is the most sensitive to EM fields. When affected, it can cause serious malfunctions at the neuronal level, neural synapse and isolated neural structures. People who are in contact with electromagnetic fields, eventually face memory and higher nervous activity disorders.

When being affected by electromagnetic fields, changes in the pituitary adrenal system may occur. When being affected by electromagnetic fields, pituitary adrenal system is stimulated and therefore the amount of adrenalin in the blood rises and can trigger blood clotting. It is acknowledged that hypothalamus – pituitary – adrenal cortex system reacts on environmental interaction immediately and consistently.

Reproductive system disorders are usually connected with changes in its regulation within the nervous and neuroendocrine systems. This has been shown in research concerning the pituitary gonadotropic activity condition as it is affected by electromagnetic fields. Continuous EM field irradiation leads to lower pituitary activity.

Many scientists refer EM fields to teratogens that influence women’s health during pregnancy and fetus development. It is thought that electromagnetic fields can, for example, lead to physical defects of fetus. The fetus is very vulnerable at infancy during period of implantation and early organogenesis.

It is proven that fetus sensitivity to EM field is notably higher in mothers and may cause damage during it’s development. Results of epidemiological studies allow us to estimate that pregnant women who are in contact with electromagnetic field might suffer from premature birth. It might negatively affect fetus development and even cause congenital malfunctions of fetus.

Electric field strength of 50 Hz commercial frequency in facilities (at 0.2 m distance from windows and walls, 0.5-1.8 m high from floor) should not exceed 500 V/m (kilovolt per meter).

Magnetic field strength of 50 Hz commercial frequency in facilities (at 0.2 m distance from windows and walls, 0.5-1.5 m high from floor) should not exceed 10 mcTl (microtesla).

The electrical field of 50 Hz commercial frequency from overhead transmission lines and other objects on the territory of residential constructions should not exceed 1 kV/m (kilovolt per meter) 1.8 m high from ground.

The magnetic field strength of 50 Hz commercial frequency from overhead transmission lines and other objects on the territory of residential constructions should not exceed 25 mcTl (microtesla) 1.8 m high from ground.

In home, domestic appliances are sources of electromagnetic exposure. A person should evaluate their effect at a distance 10 ± 0.1 cm while standing in front, behind and next to the object (except TV).

Electromagnetic field from TV with a diagonal less than 51 cm (20”) is measured at a distance of 50 ± 1 cm in front, behind and next to the TV. When screen diagonal is more than 51 cm, the EM field is measured the same way at a distance of 100 ± 1 cm. The device must be preliminarily turned on and work at least 20 minutes before measuring.

Electromagnetic field is measured at 50 cm distance from the screen.

Water quality measurement is intended for quality evaluation of drinking water, as well as of water from treatment systems such as hydroponics, fish tanks, swimming pools, domestic appliances and from water wells.

The device measures the amount of solid particles that have been dissolved in water (TDS- total dissolved solids) per 1 million water particles – ppm (parts per million).

Among water particles, there is an enormous amount of dissolved water impurities in it. The main impurities are both inorganic salts (such as chlorides, sulfate bicarbonate of calcium, sodium, magnesium, potassium) and a small amount of organic substances.

The amount of dissolved in water solid particles depends on natural environment and varies from region to region. In the city, water content is influenced by it’s industrial drainage, rainfall drainage, chlorination etc.

Solids dissolved in water determine our water quality and can affect our bodily functions.

Potassium and magnesium salts affect water hardness. High levels of these elements can worsen the water’s taste, smell, muddiness etc. Hard water negatively affects digestive system, hair and skin when we shower. It can also  cause kidney diseases.
With the help of EcoVisor F4 now, it is possible to determine whether the water is suitable for drinking, domestic needs or if it requires purification.

EcoVisor F4 can be used for evaluation of water filter efficiency. In addition, EcoVisor F4 is used for reverse osmosis filter. Such filters have a few filtration levels. One of them is represented by reverse-osmosis membrane which stops water impurities that cannot be stopped by other filters. This membrane’s service life period depends on amount of impurities in stream water. If the membrane clogs, it can lead to its mechanical damage and the whole filtration system can break down.

EcoVisor F4 can measure the amount of solid particles entering and exiting the filtration system and record its indication. If the amount of salts when exiting has increased, it is time to wash and change the membrane.

In addition, EcoVisor F4 is used in aquaristics. The device can pick water with necessary amount of solids.

Moreover, EcoVisor F4 can be used when watering plants and flowers. Harsh water can negatively affect plants because it increases concentration of lime in the ground. As the result, the ground becomes alkaline and blocks the nutrition for the plants.

Water with high amount of solids is harmful for domestic appliances (washing machines, coffee machines, and irons with steam generator, kettles, dishwashers and boilers). In all of these devices, there is a heating spiral. The scale on the heating spiral can overheat and breakdown. The EcoVisor F4 can help to evaluate quality of water in domestic appliances and take precautions when using it in the future.